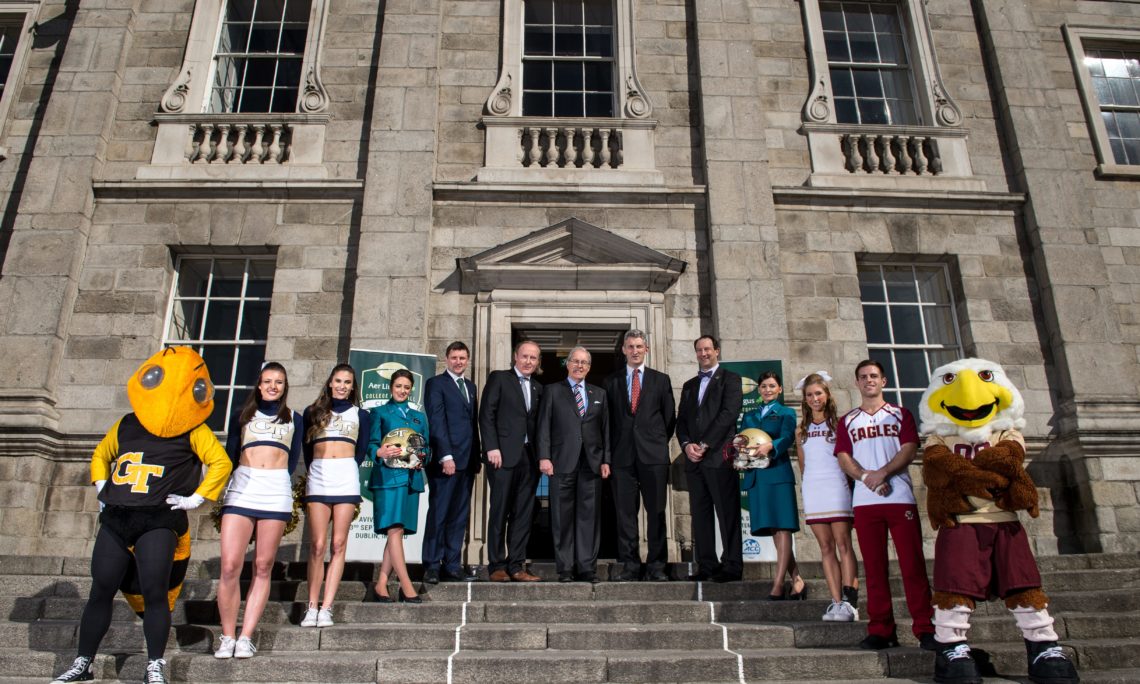 31 March 2016; At the unveiling of Trinity College Dublin as the Welcome Village for this Septembers Aer Lingus College Football Classic in the Aviva Stadium between Boston College and Georgia Tech are, from left, Georgia Tech mascot Buzz, Georga Tech cheerleaders Sarah Kate Somers and Jackie Carro

It was all systems go on March 31, 2016 for the launch of September’s Aer Lingus College Football Classic in the Aviva Stadium between Boston College and Georgia Tech. As part of Game-week 2016 (August 31st to September 4th), there will be a series of high profile business, cultural and educational events throughout Dublin City. Check out some photos of our Ambassador at the launch.

Under the banner, “Much More than a Game”, the 2016 Classic organisers, Irish American Events, announced that Trinity College Dublin will be the venue for the official Welcome Village and as such will host a variety of social, cultural and business-oriented activities. In addition to over 100 football squad members per team, Boston College and Georgia Tech are both travelling with a 150 piece strong marching band and cheer-leading troops and the renowned pre-game pep rallies and tailgate parties will be among the many highlights to take place at the 2016 Classic head-quarters, Trinity College.

The game will be broadcast live by ESPN globally however talks are also progressing for ESPN to broadcast their immensely popular flagship sports news programme SportsCentre  live from Dublin for over three hours prior to kick off – showcasing the immense benefit the game will have for Ireland on an international stage.

The Welcome Village will also play host to three profile High School games in front of a grandstand stadium in the grounds of Trinity College.

As part of Game-week 2016 (August 31st to September 4th), there will be a series of profile business, cultural and educational events throughout the City. On Wednesday, August 31st, Senator George Mitchell will be the keynote speaker at the Irish Institute Alumni event; On Thursday, September 1st there will be a joint high-level faculty symposium ‘University and the Innovation Economy’, comprising of senior political, academic and business leaders held at the Burke Theatre of Trinity College.

On Friday September 2nd, one of the undoubted business highlights of the week’s events will the Boston College Chief Executives Club Global Forum which will be held at Dublin’s Mansion House and will be the first time this prestigious organization has held one of their events outside of the United States and will bring a gathering of global leaders from Boston, Atlanta, Europe and Ireland.