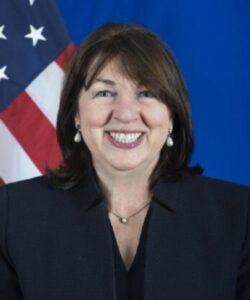 President Joseph R. Biden, Jr. nominated Claire D. Cronin to be United States Ambassador to Ireland on June 23, 2021.  After confirmation by the United States Senate, she was sworn in by Attorney William Bonaccorso on January 19, 2022, and presented her credentials to the President of Ireland, Michael D. Higgins, on February 10, 2022.

Prior to her appointment, Ambassador Cronin served as a member of the Massachusetts House of Representatives and was the first woman to serve as House Majority Leader. During her service as a legislator, Ms. Cronin was also Chair of the Committee on the Judiciary, where she was the architect of significant pieces of legislation, including major criminal justice and police reform.

Ambassador Cronin dedicated much of her legislative career to advocating for increased education funding.  She worked extensively on improving access to mental health and substance abuse services, increasing protections and services for victims of domestic violence, and advancing civil rights.  Ambassador Cronin has been a strong advocate for supporting veterans and their families, and she served on the conference committee for the BRAVE Act, which enhanced benefits for veterans and their families.

For two decades, Ambassador Cronin also served as a Mediator/Arbitrator for Commonwealth Mediation in Brockton, MA.  Most notably, she served as an arbitrator on the landmark settlement of the Massachusetts clergy sexual abuse cases.

Ambassador Cronin earned her B.A. from Stonehill College and her J.D. from Suffolk University. She is admitted to practice law in Massachusetts in both state and federal courts and is also admitted to practice before the United States Supreme Court. She is the recipient of multiple honors and awards, including the Jewish Community Relations Council Legislative Leadership Award (2020), the Massachusetts Bar Association Legislator of the Year (2018), the Massachusetts League of Community Health Centers Leader Award (2017), and the Equal Justice Beacon of Justice Award (2016).  She and her husband, Ray, have two adult daughters.