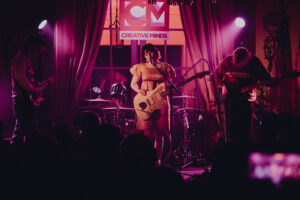 U.S. Ambassador to Ireland Claire Cronin hosted an event at the American Ambassador’s Residence in the Phoenix Park in honor of International Women’s Day. The event also showcased Irish musical artists who will be attending the 2022 South by Southwest (SXSW) conference in Austin, Texas.

This event featured performances by NewDad and Pillow Queens – two of the female-led bands performing at the SXSW Festival this year. Their performances were peppered with remarks from Catherine Martin TD, Minister for Tourism, Culture, Arts, Gaeltacht, Sports and Media, and a Q&A with Angela Dorgan, CEO, First Contact Music.

The event highlighted the increasing opportunities for Irish women in the arts.  Speaking at the event, Ambassador Cronin said “it’s a welcome progression and something we should continue to strive for. American singer Missy Elliott once said, ‘Women are not always taken as seriously as we should be. So sometimes we have to put our foot down.’ And the theme of this year’s International Women’s Day is to break the bias and ask people to me at Mountain a world free of biased stereotypes and discrimination. And tonight we are asking some of Ireland’s best and brightest to put their feet down.”

The event was attended by 160 guests from the arts, civil society, academia and Women’s Rights NGOs.