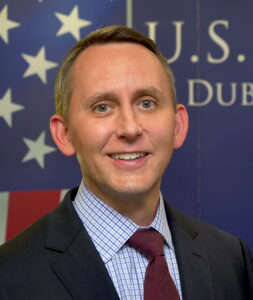 Michael Clausen arrived in Dublin as Deputy Chief of Mission in August 2022. Since joining the State Department in 2002, Mike has served in a wide variety of policy, communications, and staff positions, including as spokesperson at the U.S. Mission to the European Union, Director of the North Korea Unit in the Office of Korean Affairs, Deputy Chief of Staff at Embassy Kabul, and Watch Officer in the Executive Secretariat’s Operations Center.

Mike’s other overseas assignments include postings in Beijing, Singapore, Baghdad, Taipei, and, most recently, Kyiv. In Washington he has also served in the Office of the Special Representative for Afghanistan and Pakistan and in the Office of Chinese Affairs.

Mike earned a Bachelor’s degree in Political Science at Columbia University and a Master’s degree in National Security Studies at the U.S. Naval War College in Newport, Rhode Island. He is joined in Dublin by his wife, also a Foreign Service Officer, and their two children.