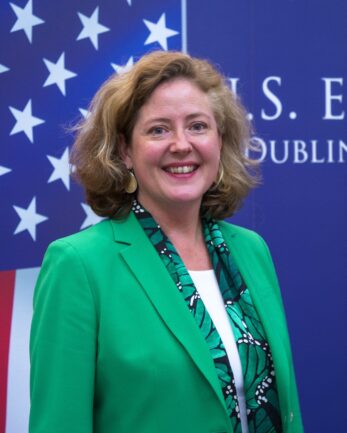 Alexandra McKnight assumed her duties as Chargé d’affaires ad interim at the U.S. Embassy in Dublin on January 19th, 2021, after the departure of Ambassador Edward F. Crawford.

Ms. McKnight originally arrived in Dublin to take up the role of Deputy Chief of Mission in September 2020.  Prior to that, Ms. McKnight was posted to Washington, where she was Senior Advisor for Resilience to the Director General of the Foreign Service and Deputy Director of the European Bureau’s Office of Nordic, Baltic, and Arctic Security Affairs.  From 2016-2018, Ms. McKnight served as the Migration and Human Rights Chief at U.S. Embassy Mexico City, and before that she was the Political-External Unit Chief at U.S. Embassy Rome.

In Washington, Ms. McKnight has served as Senior Country Officer for Spain, Portugal, and Malta, and Country Officer for the Czech Republic and Slovakia.  She also completed a year-long Pearson Fellowship with the House of Representatives Oversight Committee.  Ms. McKnight’s other overseas tours include Assistant Press and Cultural Attaché in Prague, Consular-Political Officer in Bogotá, and Human Rights Officer in Kyiv.

Prior to joining the Foreign Service in 1998, Ms. McKnight taught English in Kaliningrad, Russia, and in Lask, Poland, through the Harvard Institute of International Development’s WorldTeach program.  Ms. McKnight grew up in Cincinnati, Ohio, and has a BA in German and Russian from the University of Texas at Austin.