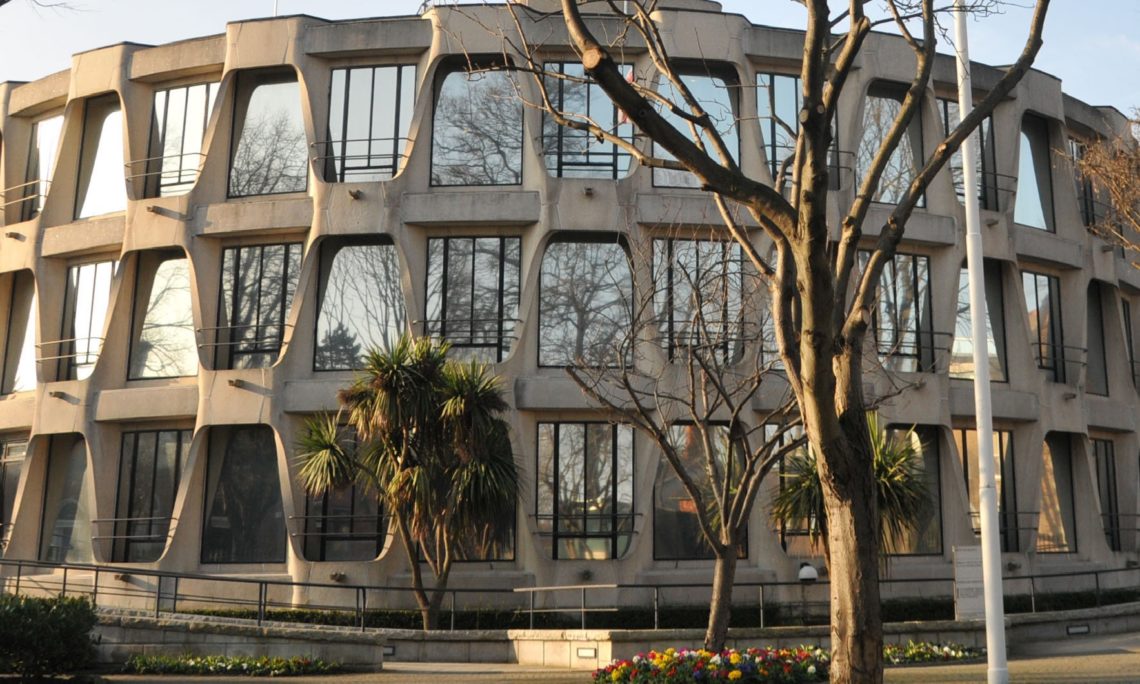 The Embassy of the United States of America has its facility in Dublin at 42 Elgin Road, Ballsbridge, Dublin 4.

Under the leadership of the Ambassador, the Embassy provides a number of services to Americans, Irish and other international people:

On May 23rd, 1964 the U.S. Embassy officially opened its new Chancery building on the corner of Eglin Rd and Pembroke Rd in Ballsbridge, Dublin 4. The building is a concrete expression of the close relationship between Ireland and the United States. Utilizing ancient Irish architectural features in a bold contemporary American design, it reflects the way Irish traditions have contributed to the socio-cultural scene in the U.S. today.

The Embassy was designed by an American architect, John M. Johansen, in consultation with the prominent Irish architect, Michael Scott. Their task was not easy. First, design a building that fits in with the triangular site at Elgin and Pembroke Roads in Ballsbridge; second, reflect Irish stylistic features; and third, the dilemma of architects everywhere, come up with a plan that is functional for an Embassy as well as attractive to the eye. That they succeeded in all respects is a tribute to their imagination and skill. Nineteenth and twentieth century adaptations of features found in fifth century Celtic monuments suggested a circular building utilizing pre-cast modular units in its construction. Being round in shape, it symbolizes the same strength and unity evident in the placement of the thirteen stars in the first American flag. This form also enables the building to face in all directions, friendly and attractive from any angle. A “moat’ of flowering shrubbery, bridged at the entrance, and a park-like plaza of benches and trees, complete the setting. The critical response has been positive.

In 1969 An Taisce, the National Trust of Ireland, honored the Embassy with its premier award “for effective development of a prominent corner site on a main city approach, for sympathy of scale with existing environment and interest of character, without imitation of surrounding buildings, and for integration with existing trees and street setting”.

The interior is equally successful. Dominating the inside is a three-storey atrium called “the rotunda”. Upon entering the building, the eye of the visitor is dramatically led upward to glass walls at the top of the rotunda. This allows the space to be bathed with natural light. Although originally intended as a reception area, the rotunda has been used in the past for art exhibitions, small concerts, lectures, formal receptions, and an exhibit of the moon rock. The interior walls facing the rotunda repeat the modular unit pattern of the building’s exterior and provide balconies for the offices on all three floors. It is a design that facilitates easy access between offices on all levels.

America first opened a consulate in Ireland in 1859 in a building off Adelaide Road. It was one of the first countries to recognize the Irish Free State and in 1927 appointed Frederick A. Sterling as an Envoy and established a legation in what is now known as the U.S. Ambassador’s Residence in the Phoenix Park. In Feb 1948, the offices of the legation moved to No. 15 Merrion Square, Dublin. By the late 1950’s it was clear that the location in Merrion Square was no longer suitable and in 1957, the new site in Ballsbridge was announced and the construction of the building was begun in 1962 by G. & T. Crampton, Ltd., of Dublin and was completed in May, 1964. There are five floors: three above ground level and two below. Irish materials were used whenever possible; for example, the base of the building is of Irish granite and the floors throughout are terrazzo of Connemara marble. The finished result was enthusiastically received at home and abroad. In Washington, a State Department official declared, “The cornerstone of our policy is to have the best architects produce the best buildings.”  The Embassy serves as the headquarters for officials and employees of the United States Government in Ireland. 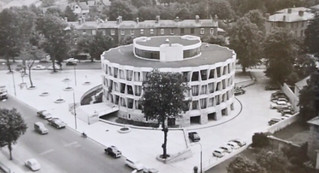