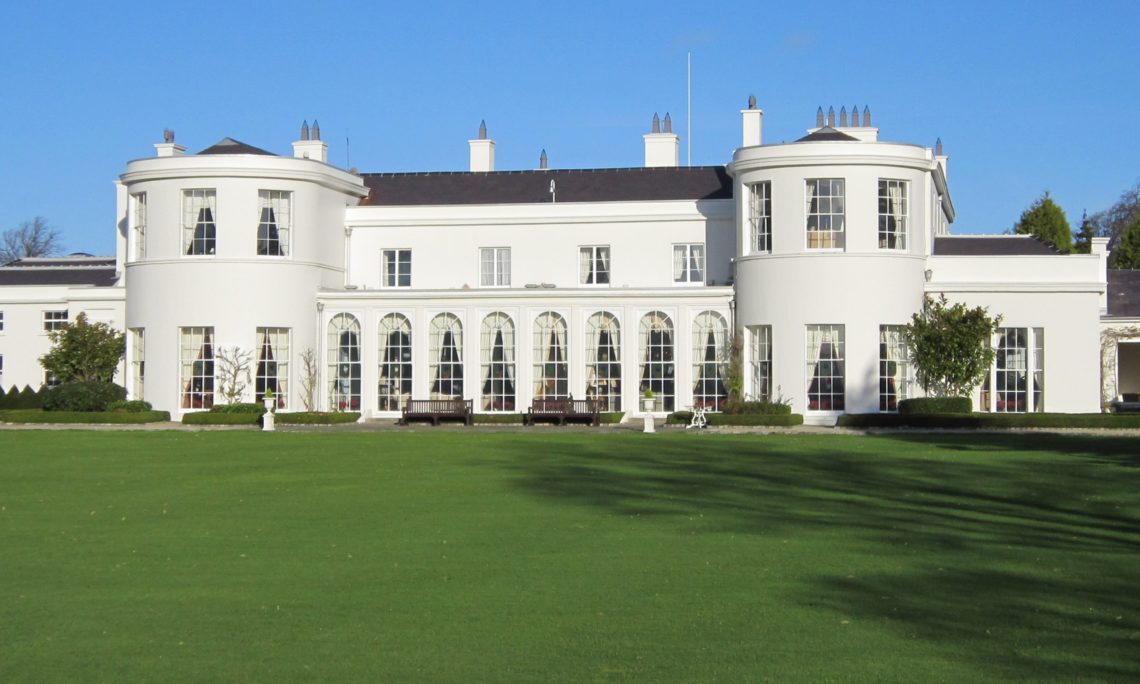 This beautiful home surrounded by sixty two acres of ground was completed in 1776. Built by Col. John Blaquiere, Chief Secretary of the British government and Bailiff of the Phoenix Park.

The Phoenix Park, embracing 1,760 acres, is reputed to be the largest municipal park in the world within a city’s limits. While it is popularly assumed that it was named after the mythical bird, most Irish experts believe the name may be derived from “Fion Uisce which means “clear water”.

The house of Col. Blaquiere, purchased by the British Government in 1782,was made the official residence of the Chief Secretary, and remained so until 1922 when Sir Homer Greenwood, the last holder left office. Among the prominent Chief Secretaries who had occupied this residence were Sir Arthur Wellesley, later to become the Duke of Wellington, Sir Robert Peel, Lord Castlereagh. Lord Bryce, later British Ambassador to the United States, W.FI. Smith. When the Duke of Marlborough was appointed Viceroy in 1878, Lord Randolph Churchill joined him as private secretary. Young Winston as a small boy, roamed the gardens and woods and took great delight in riding up and down the paths in his donkey and cart. Sixty nine Chief Secretaries lived here from 1776 until 1922 when Ireland gained its independence.

The United States of America was one of the first countries to recognize and establish diplomatic relations with the new Irish Free State. The first Envoy Extraordinary & Minister Plenipotentiary, the Honourable Frederick A. Sterling arrived in Dublin in 1927. After taking a lease on the property from the Board of Works, (with the rent set at a penny per year), he took up residence here in the Phoenix Park. It was appropriately coincidental that the United States, which declared its own Independence in 1776, should establish the President’s representative in the residence completed in the same year. Until 1949, the offices of the Legation as well as the residence of the Minister were located within the house.

When Ireland became a Republic, the status of the Legation was upgraded to a full Embassy, and the first United States Ambassador, George Garret, was appointed to Ireland. The offices of the Embassy moved out of the house, and this became the home of the Ambassador.

Extensive renovations to the house and property were made by the U.S. Government in 1952. The property now consists of 62 acres of lawn, orchards and gardens on which are located the Ambassador’s residence, three cottages and a gate lodge. The lower ground floor of the residence comprises a ballroom, reception and dining room, library, office, kitchens pantry, staff room and laundry. Six suites, bedroom, bathroom and dressing room, plus a sitting room are located on the upper floor. The Residence is furnished with furniture and equipment obtained in Ireland, the United States and many other countries.