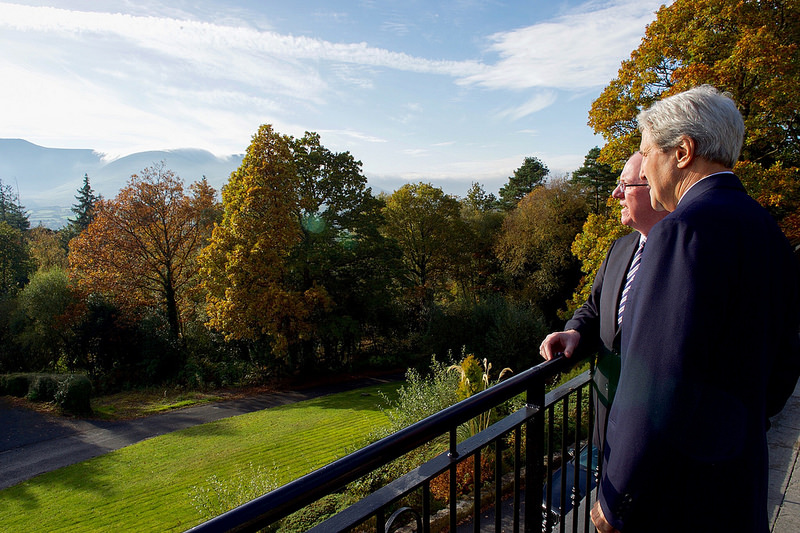 U.S. Secretary of State John Kerry and Irish Foreign Minister Charlie Flanagan take in the view from a balcony at the Aherlow House Hotel in Tipperary, Ireland, following a bilateral meeting and before a joint news conference and the Secretary's receipt of the Tipperary Peace Award on October 30, 20

U.S. Secretary of State John Kerry traveled to Ireland on October 30th to meet with Minister for Foreign Affairs & Trade, Charles Flanagan TD and the pair discussed the Northern Ireland peace process, as well as a range of regional and global issues. After the meeting Secretary Kerry said “ I’m deeply appreciative for your welcome and also for the extraordinary contributions of Ireland to so many different parts of what we are engaged in right now in terms of seeking peace, not just within Europe but peace also in the issues – on the issues that he mentioned with respect to Syria, Yemen, Libya, Pakistan, India, the challenge of nuclear weapons in North Korea. This is a challenging moment on a global basis, and very few countries step up as much as Ireland steps up.” Mr Kerry announced the expansion of a one-year internship programme for Irish J1 students in America.

While in Ireland, Secretary Kerry also accepted the Tipperary International Peace Prize, which was awarded by the Tipperary Peace Convention to honor the Secretary’s efforts to end conflicts in a number of countries. After being presented with the award, Secretary Kerry remarked “I thank you for the honor of this award, which I accept really on behalf of all of the people in the United States State Department, in the White House, who labor for peace every single day; for our colleagues around the world, without whom on a multilateral basis we can’t make things happen; and for all those desperate people for whom peace can so often be so elusive and so passionately yearned for.” Before departing Ireland, Secretary Kerry made a surprise stop at PaMcGrath’s Pub in Co. Limerick for lunch and with the help of bar staff, he perfected the art of pouring a pint of Guinness. 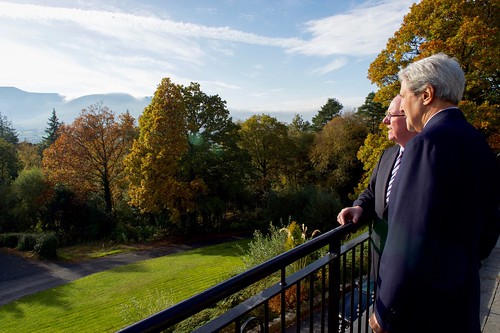 Remarks by Secretary Kerry in Ireland